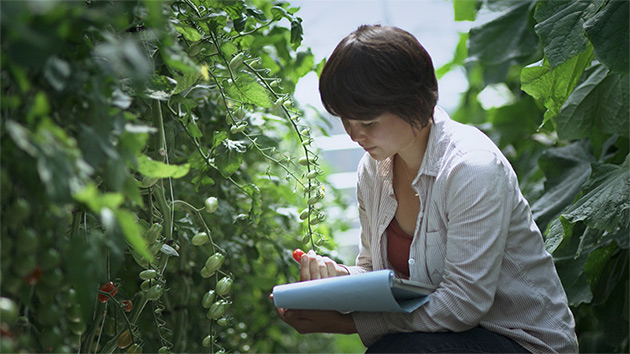 Why Try Something New?

Market farming is much like every other business in this rapidly changing world in that there is always something new. Plant breeders develop varieties with better flavor, yield, disease resistance, appearance, or earliness. Researchers find new ways to control pests. Engineers tinker with tools and equipment to build them better. The allied industry thrives on the motto that improvements are just waiting to be discovered.

But as Mark Twain observed in his travelogue, Roughing It, " Necessity is the mother of   With the parade of new products every year, the wide range of choices can be perplexing. You don't want to overlook important new developments, while recognizing the measure of risk inherent in change.

To better forecast which "new and improved" products are worth your time, attention, and money, it makes sense to take a methodical approach. Here's what we recommend:

1 • First, take a look at this year's new products and read what they have to offer.

Some will jump out immediately as possible purchases, so take notes as you go.

2 • Think about your own particular problems on a crop-by-crop basis.

Maybe you've had crop failures or poor yields from a certain variety. Or perhaps you grow a crop well, but it's costing too much to weed or harvest to be profitable. You might want to extend the season of some of your crops. Or you might want to differentiate yourself at market by growing something a bit different. Perhaps it's time to try something you've never grown before. As you assess the past season's crops, make a list of what you would like to do better.

Place at the top of the list those that seem to have the most potential to increase your profits.

4 • Finally, go back to the new products and review the product descriptions again.

Keep an eye toward meeting the objectives you've established for next season. Analyze the cost versus the potential return, and decide which products to include in your budget.

Much of your success as a market farmer depends on choosing the seed varieties that will perform best in your climate and soil. If you've been growing for a long time, you probably have found varieties that do better than others and tend to stick with them. If you're a newer grower, you may be trying multiple varieties in search of the best performers. In either case, taking a systematic approach to adopting new varieties by conducting on-farm trials will reveal improvements and solutions most efficiently.

Trials run the gamut from rigorous research involving randomized replications to more casual observational trials grown in small test plots. Even the most simplistic trials can be time-consuming, so remember to take on only what you can handle. It's better to get a few valid results than to have more data than you can evaluate.

Here are some of the factors to consider as you get set up for trialing new products.

1 • First, identify your objective in trying a new variety.

Would you like a variety that is earlier, a different color, a better yield? It's okay to have several objectives for a specific crop, but you should think clearly about this, and write down the advantages you hope to gain by growing something new. You need to be able to evaluate a new variety on the traits that will make it more profitable for you.

2 • Next, read variety descriptions carefully to find the traits you seek, and purchase one or more new varieties plus a standard variety you have grown previously.

It's important to have one familiar variety in a trial so you'll have a basis of comparison; if one of the new varieties fails, you will be able to determine whether it was because of weather or some other environmental problem, rather than the genetics of the new variety.

3 • For the most accurate comparison, plan to treat each variety exactly the same.

Seed them on the same date; use the same potting mix in the greenhouse; plant them outside at the same time and in the same plot. Be consistent with all inputs and practices. Don't plant a trial variety at the edge of a field, where plants may experience different light, water, and nutrient availability. The "edge effect" is a well-known phenomenon among vegetable growers, and it can cause plants on the edge of a plot to do either better or worse than those at the interior.

4 • Other critical components of variety trials include labeling and recordkeeping.

Plan to use tags in the field to identify varieties, but also draw a map detailing their locations in case the tags get lost. Keep careful records of planting dates, inputs, rainfall and irrigation, weather events, first harvest and last harvest, yield, and sales revenue.

Once you have a trial established, you can score it at any time-point relevant to you. If you're looking for earliness, score the varieties early in the season by counting the number of early-ripening fruits. If it's disease resistance you want, wait until later in the season to score the trial. Focus on your desired traits, but also take notes on other plant characteristics as they may prove useful later on.

If you are thinking of growing something completely new, then you have no existing basis of comparison. In this case the best strategy is to read up on and choose several varieties, planting test rows of each. For example, if you are thinking of growing sunflowers to brighten your market stand, review our article, How to Choose Sunflower Varieties, take a look at our comparison charts for Tall Sunflower Varieties and Dwarf Sunflower Varieties, then select three or four varieties from the Brightest and Best Sunflowers to grow in a test plot. With luck, all of them will do well and you'll have plenty of flowers to take to market. But some may do noticeably better than others, and you will know to grow them again next season, possibly as the control group for another trial.

By setting objectives, planning your trials, and following through with evaluations, you will find the new products that are going to help you be a better farmer.

Top ˆ
On This Page
Seed Variety Trialing: Why Try Something New?
Why Change?

Each year, Johnny's introduces dozens of new products for commercial growers, and this year is no exception.

When you receive our new catalogs, you'll invariably find new varieties of vegetables, herbs, and flowers, as well as useful new tools and supplies.

Johnny's quest for solutions to common problems reflects our commitment to working in partnership with our customers, to advance the business of market farming as well as the simple pleasure of growing.