Pea Selection at Johnny's • The Story of Sugar Ann

by Steve Bellavia, R&D Product Technician
The Common Pea
For anyone just setting out to grow peas, it may not be apparent that not all pea seed is created equal. Not only are there differences between pea varieties, even seed lots of the same pea variety can vary widely in quality, depending on how the seed crop is grown and managed.
Top ˆ
Choose Your Peas Wisely 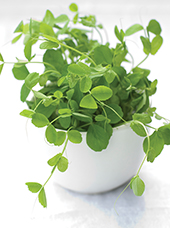 The Common Pea (Pisum sativum L.)
There are many different types of peas from which to choose. There are the traditional shelling or English peas, the edible podded snap and snow peas, and even varieties particularly well-suited for producing edible pea shoots or garnishes.

From this sea of pea possibilities, Johnny's trials and selects only the best performing varieties, then meticulously culls and tests each line, to offer highest-quality pea seed of the following types:

View All Our Pea Varieties…

Through traditional selection and crossing, pea breeders have continued to breed improved varieties and even novel types. 'Sugar Snap' and 'Sugar Ann' are just two prime examples of extraordinary results that come of ordinary methods.

Snap peas differ from shelling and snow peas in that their pods are thicker, rounder, crunchier, juicy sweet, and apart from the string, entirely edible. Though there were commercial varieties as far back as the 1880s, they disappeared from the seed trade, and by the 1970s, there were no snap peas being sold commercially.

The work of pea breeders Dr Calvin Lamborn and Dr MC Parker of Twin Falls, Idaho, brought us the new variety 'Sugar Snap.' Upon introduction in 1979, this cross between a snow pea and a mutant shell pea — which Johnny's regards as still the most flavorful snap pea — earned immediate recognition as an All-America Selections winner.

'Sugar Snap' is a climber, though, producing vines reaching 6 feet or more in height and requiring support. Growers not wanting to trellis their peas desired a bush plant, and just five years later, pea breeders introduced the more diminutive 'Sugar Ann.' A 1984 AAS Vegetable Award winner, 'Sugar Ann's' pods are every bit as plump and sweet as its lofty parent, but its vines are only 24" inches tall, and it matures about a week earlier. Thank you, Calvin and MC Parker!

The Father of the Modern Snap Pea 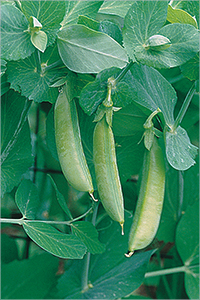 As a purveyor of seed, what Johnny's means by quality is that our pea seed consistently delivers superior germination rates, true-to-type performance, yield, and flavor. While the merits of yield and flavor are obvious, why the first two matter so much — germination rate and purity — bears some explanation, as they shape the outcome of anyone's pea-growing efforts.

Here's how we do it…

To ensure that our 'Sugar Ann' stock seeds were top-notch, we enlisted the help of our friend and colleague, Dick Lowe, a long-time, highly regarded pea breeder at Pure Line Seeds in eastern Washington who knows peas inside and out.

Back in 2008 we sent Dick a few pounds of 'Sugar Ann' seed. What he did for us was plant and grow these out, then save seeds from just a handful of the best, true-to-type plants. Over a period of 5 years, he grew enough seeds from the original handful of plants to reach the point where there were enough stock seeds for a commercial production. He finished the reselection and increasing seed process in 2012, and sent us back 850 pounds of seed.

So this is how we got our original, elite stock seed for 'Sugar Ann,' and this is the seed we use to produce the seed that we offer today. Thank you, Dick and PureLine Seeds!

Top ˆ
Maintenance of Quality — We Do the Rogueing, So You Don't Have To

Within our snap pea seed crops, every once in a while a mutant plant will make an appearance. It's not a snap pea, but it might be more like a snow pea or a shell pea. We in the seed industry call this mutant an "off-type."

In seed stock production, it could become a serious problem if we didn't get rid of the off-types. These naturally occurring off-types are uncommon — but can create significant problems over time. Why?

The reason is that these off-type plants tend to produce more seeds than the normal snap peas. If the off-type plants are not promptly removed from the seed crop itself, over time, the percentage of off-type plants from the resultant seed lots will increase and become noticeable to the individual gardener or grower who plants them. What to do? 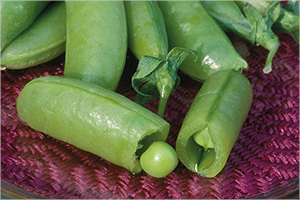 The only way to ensure that our seed lots are of good quality with a very low percentage of off-types is to "rogue" the crop. "Rogueing" in the seed world means walking through the seed production fields and closely inspecting plants and removing all off-type plants before they set seed. We've trained our trialing eyes to look very carefully at strains, and are able to pick up on a single plant off-type within the row. This is time-consuming, tedious, and expensive, but it is the only way to grow pure crops of seeds.

We put a lot of effort and work into growing the very best snap pea seeds, and are pleased with the results. We hope you are, too. Seed lots of peas will always have a few off-types, but not enough to cause economic loss. When you go to harvest and market peas, you'll find you get more of what you expect with seed from Johnny's.

OR, download a print-friendly, PDF version of our Snap & Shell Pea Comparison Chart…

Just as each type of pea has its own set of characteristics, so too do different pea cultivars. Use this chart to compare distinguishing features between Johnny's snap and shelling pea varieties.