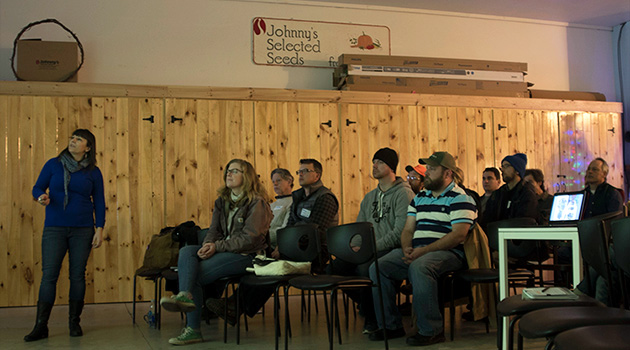 Albion, Maine: December 7, 2016 — Johnny's Selected Seeds hosted Lane Selman, Founder & Director of the Culinary Breeding Network in Portland, Oregon, as guest speaker at its Research Farm in Albion, Maine. Selman's visit was well-timed, following Johnny's first Seed-to-Table Variety Tasting in September. Present at the day-long series of presentations, culinary tastings, and discussions were employee-owners of Johnny's, along with local chefs and farmers, as Selman inspired the group with her story about how the Culinary Breeding Network developed in the Pacific Northwest. Many models exist for involving farmers in the breeding process, such as gathering farmer input to set breeding goals, variety trials, and participatory plant breeding, but fewer models for involving chefs in that process. There is a vibrant farm-to-table scene in the Northeast, but the plant breeding side is underrepresented. As plant breeding supplies growers with improved cultivars for flavor, resiliency, sustainability, and yield, the Culinary Breeding Network's partnerships align well with Johnny's 40-year history of breeding and trialing with the input of organic growers and researchers across the US.

Sparking the flavor conversation
" Do you know where the seed comes from? Do you know what variety it is and who created it? Most people do not. It's the door behind the farm. In this room, you will meet some of those people. The plant breeders. "

Selman's initiative in founding the Culinary Breeding Network stems from her position as Organic Farming Researcher at Oregon State University, where she has trained her focus on organic systems and participatory breeding. She acts as Oregon research project coordinator for the Northern Organic Vegetable Improvement Collaborative (NOVIC), a project funded by the USDA Organic Research and Extension Initiative (OREI). Her visit strengthens the connections between network leaders and participants old and new, and among her collaborators, she counts many partnerships that overlap with those of Johnny's:

Working principally with vegetable trialing and breeding, Selman described the goals and results of the partnerships' efforts with solanaceous crops such as tomatoes, peppers, and potatoes; cucurbit crops such as cucumbers, melons, summer and winter squashes; corn, carrots, and chicory (which she predicts to be "the next kale"); and numerous others. Through the Culinary Breeding Network, Selman has additionally been investigating distinctly improved varieties of herbs such as 'Macedonian Lanceleaf' parsley, cilantro and shiso varieties, as well as barley for such applications as mugicha–based beverages, leavened and unleavened baked goods, and agnolotti.

In her extensive work with Ospud, a SARE-funded project at OSU, the group's efforts addressed potato production, pest and disease, and nutrient management issues. While there is ample germplasm for resistance for potato breeders to work with, the call heard most clearly by organic breeders from organic growers, Selman has learned, is for more flavorful varieties. And the reason behind this is that most conventional potato breeding work is done with potatoes destined for the French-fry vat, where flavor is less critical. In fact, while organic growers can provide a lengthy list for what they need in the marketplace, flavor consistently tops that list.

Selman explains why the first step in culinary breeding outreach is to develop working relationships between growers and breeders:

Farmers are the first stakeholders to engage. They will be the first to work with breeders' new and developing varieties — if production growers don't like it, it won't ever make it to the marketplace. In many projects, such as Ospud and NOVIC, we have focused quite a bit on building a cooperative of fresh market farmers, seed growers, and plant breeders in order to address farmers' needs. With their guidance, we plan our trials according to when and how they plant and develop our evaluation criteria around what is important to them. This has been successful and resulted in increased communication between farmers and breeders.

Each year, a national network of breeders and growers trial a tremendous number of vegetable varieties. Across higher latitude tiers, there is often an emphasis on season extension. Under the aegis of the NOVIC project, which involves breeders for organic systems, new breeding lines are trialed against "checks" (varieties known to perform well), trialing both the Mother varieties and their Daughters to evaluate performance in many different regions with many different environments. Each region elects to focus on a specific crop, with recent selective breeding goals targeting the best-performing:

Yet growers and researchers are out in their fields every day, which means they are by default making their selection decisions in relative isolation. Selman went on to describe the second component of a strong Culinary Breeding Network — bringing more voices into the conversation. To achieve that, breeders must develop relationships with chefs and consumers, and tastings are the cauldron in which these relationships are forged.

In many places such as Portland [Oregon as well as Maine], it is becoming more common to know who is growing our food. We visit the farmers market to buy our food. New Seasons [and Whole Foods] label where they get their produce and meats. But do you know where the seed comes from? Do you know what variety it is and who created it? Most people do not. It's the door behind the farm. In this room, you will meet some of those people. The plant breeders. Plant Breeders create and guide the varieties of fruits, vegetables, and grains we eat. Plant Breeders are decision-makers.

To underscore the value in personal connections between breeders, growers, and consumers, Selman explained:

As a researcher, I get a lot of numbers from the trial fields. I put all the numbers in to my formula and crank out an answer. But, in hanging out with tasters, we are able to bridge the gap between the breeders and the eaters to improve both the agricultural and culinary quality of these varieties. When you drink a little Prosecco together, and you will hear what the outcome is — what they want!

Selman then walked the audience through the mission and goals of the Culinary Breeding Network across the Pacific Northwest. The CBN's MISSION is to bridge the gap between breeders and eaters to improve agricultural and culinary quality, and the GOALS are to:

Borrowing a page from the book of bourbon
With this flavor wheel used for bourbon tastings, Selman provides an prototype for developing a winter squash lexicon. Characterizations of the Winter Squash Eating Experience share features with the enjoyment of alcoholic beverages such as bourbon or wine (Sweet & Fruity, Sweet & Rich, Savory & Musky). A key culinary characteristic for squash is best application (Raw, Steamed, Roasted). Equally important is whether and how long to store varieties before they reach peak eating quality. (See Johnny's Winter Squash Comparison Chart.

Only through tasting can all the flavor nuances be experienced and described.

Using winter squash as an example, Selman inspired the group by detailing the network's squash tasting events and the development of a lexicon.

Culinary breeding often trains a spotlight on elite chefs not only for their creativity and educated palates, but because they have the voice and the power to place vegetables at center stage on the plate. In addition to bringing chefs into the fold, culinary breeding networks involve local retailers, natural food grocers, and grocery chains, wholesalers, co-ops, nutritionists, dieticians, naturopaths, local value-added producers, produce buyers, and media professionals.

Following Selman's presentation, Johnny's research staff briefed the group on Johnny's own outreach efforts and goals, whereafter the group got down to business in a lively, blind tasting exercise of six carrot, six winter squash, and four cayenne pepper varieties. While many attendees have spent entire careers tasting vegetables at a professional level, many others were novices in the art and science of flavor characterization. 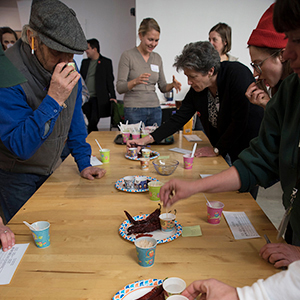 Evaluating cayenne peppers
Tasters get down the preferential business of evaluating, "I like this … but not that."

To prime the group on carrots, Navazio shared that the nuances of carrot flavor derive not from their sugars but the group of phytochemicals known as terpenoids, over a hundred of which have been identified. Terpenoid profiles can vary not just from variety to variety, Navazio stressed, but from root to root within a particular variety. After the sweetness of a carrot hits your tongue, the flavor can go flat — if it doesn't taste like a carrot, it's lacking in terpenoids, whereas too much of the wrong ones can give the carrot a soapy, turpentine-y, pinecone, or "Pinesol" edge. With regard to "true carrot flavor," however, not everyone prefers the same type of carrot: some like their carrots perfume-y, with a floral note, while others prize a spicy, or cumin-like taste; and then a third category constitutes "other" flavors, what Navazio calls "harshness." And then, there's the crunch. "Rubbery" was the assessment on one variety, and if it's rubbery right out of the field, the eating experience can only go downhill from there.

One thing Selman emphasized is that tastings are a preferential exercise, encouraging the group to "note what you like," to "use the comments" field on the ballot and state, "I like this, or that, but I don't like that," based on individual preference. Preferences differed markedly between raw and cooked samples, as well. 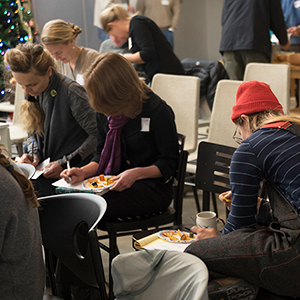 Tasting can be both serious business…
… AND a whole lot of fun. By inviting the public to tasting "parties" Selman is able to draw a wider audience.

In the interest of turning a subjective experience into quantifiable data, Johnny's Vegetable Product Manager Pete Zuck brought up that oftentimes seasoned tasters make an initial run-through, looking at and tasting all the offerings without a ballot, then go through again with the ballot to rank the offerings more fairly. "At Johnny's, we will often taste a cross-section — with six or eight subsets to prime the palate," said Zuck. "That's why we favor a 1–9 ranking scale, sticking with 1, 3, 5, 7, and 9 — the odds — for first impressions, then using the evens as we need them. If the sweetest one, for instance, is the 9, the least sweet one would be the 1. That spreads your numbers when you do go through and statistically analyze."

The group was offered an additional means for avoiding "palate exhaustion" with a tincture of the herb Gymnema sylvestre, which impairs the ability to taste sugar by blocking sweet receptors on the tongue. All in all, the day at Johnny's research farm gave the audience a solid footing for expanding its culinary breeding network — as well as "unique personal experiences to highlight the principles of gustatory sensation."

Selman's work is an inspiration for vegetable plant-breeders, growers, chefs, and vegetable lovers of all stripes here in New England, and we all look forward to continued collaboration with Lane. I'm excited about the connections that we can make here in New England, where there's already a strong farm-to-table scene and great support for local food. The more understanding there is about where our food comes from, the better choices we will be able to make as a community. It's exciting to see interest from farmers and chefs in breeding and variety development. Their input, along with Lane's visit is helping shape where our efforts go here in New England. Stay tuned for more events!

In recapping the event, Lane shared her viewpoint:

I was excited the breeders at Johnny's reached out to me to help brainstorm how they could develop a network of farmers, chefs, and consumers similar to the Culinary Breeding Network. The Johnny's team sees the benefit in including a wider range of stakeholders in the breeding conversation, as it will allow them to create more relevant and desirable varieties for both farmers and eaters. I believe the more these stakeholders understand and feel engaged in the breeding process, the stronger and more resilient our food system will become.