Gaining Efficiencies on the Farm

Recommendations from 3 Younger Experts in the Field

Above: Getting a jump on things at One Drop Farm, Cornville, Maine.
Images used with permission. All rights reserved.
Applying the Extra Dollop of Elbow Grease

Efficiency on the farm can be defined as the amount of work or tasks completed within a given unit of time. That's why, regardless of how big or small our farm, finding ways to gain efficiency can make an enormous difference. Even small changes in the way we move our bodies, manipulate physical objects, plan and coordinate tasks can save time, labor, and money — all valuable commodities that compound interest considerably over time.

We all stand on the shoulders of giants, and one of a young farmer's greatest privileges may be to apprentice with an agrarian elder. But inspiration isn't limited by chronological age. Sometimes, a better way reveals itself when we take time to stop and think. In other cases, what inspires us to work smarter is doing things the hard way for a while. Here are some thoughts on gaining efficiency as well as effectiveness on the farm, shared recently with us by 3 of Johnny's favorite, younger experts in the field. 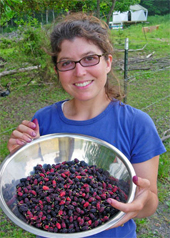 A lot of our time savers were learned from great farmers we've worked with, so I can't take credit for those, but we have a few up our sleeves as well, here at One Drop.

"Maximize efficiency!" calls out Jasper, my 2-year-old son. We all chuckle. It's amazing what kids pick up on, and Jasper has evidently tapped into the one of the undercurrents of our farm.

There are many such axioms my husband Andrew and I have adopted over the years, that help save time, labor, and materials, and therefore, money. One common theme among them is economy of motion: eliminating the unnecessary — extra trips, excess hand movements, and anything that involves repetitive strain. 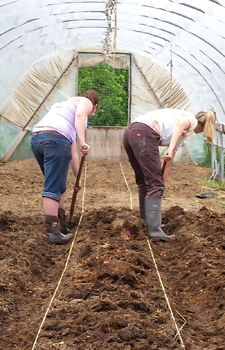 Crew members, in step, bed-form in the caterpillar tunnel.

I'm reminded of my apprenticing stint on a farm in California. "We don't pay you to walk!" stated our farmer. Instead, we crisscrossed the farm on tool-laden bikes all summer long. A touch eccentric, perhaps, but it illustrates my point.

Here is a sampling of tasks which, because they involve a series of steps and movements, to me, are like dances. Before we begin a task, we assemble all the necessary elements — tools, plans, people — then let the dance begin. I develop a rhythm while concentrating on the motions, then muscle memory takes over and the task glides to completion.

The process of potting-up into 4-inch pots takes place in four motions. In the field, we plant 3 seedlings with every step. Pruning and trellising in the hoophouses has its own cadence. There is a greens-washing dance and a fence-moving dance. 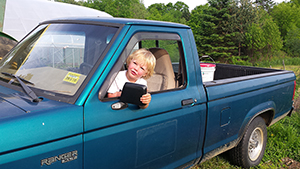 Try it! Setting yourself up for success followed by smooth, comfortable, well-choreographed movements allows the music of the farm to move you to a place of greater economy. 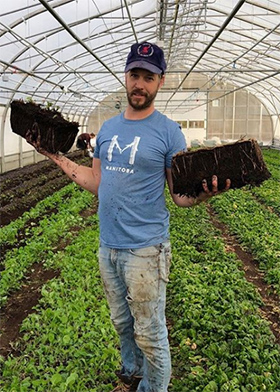 I am glad to share some of our "ingeniosity." I have a lot of different ideas, but here is a method nearly anyone starting out will gain from learning: a flame-weeder.

If you're still pulling the weeds in your carrots, bent down on your knees, you should definitely look into getting this time-saving gizmo.

One of the most notorious market gardening tasks is weeding the carrot bed. Most readers who've interned on a small organic farm will know what I am talking about. Carrots are one of the "dirtiest" crops you can grow, because they don't transplant well and are super slow to germinate. But thanks to flame-weeding, these characteristics can become an asset in the struggles to fend off weed infestation.

Flame-weeding is a technique by which weeds are killed by burning them with a blowtorch. The term "burning" is a bit misleading, though, as the weeds are not burnt to a crisp but rather subjected to a form of heat shock that causes damage at the cellular level.

In order for flame-weeding to be successful, two conditions must be present: the flames of the torch must actually make contact with the soil, and the weeds must be small enough that a single second of flame exposure is sufficient to kill them (ie, between the cotyledon stage and the first-true-leaf stage). It's also ideal to flame over a very smooth seedbed, as irregularities in the surface of the soil can sometimes deflect heat from the flame-weeder, giving some protection to weed seedlings.

Flame-weeding nicely complements the stale seedbed technique, which consists of preparing the seedbed a few weeks prior to the seeding date, and allowing weed seeds in the top 2 inches (5 cm) of the soil to germinate and emerge. When ready to plant the crop (whether directly or by transplanting) the flame-weeder is first passed over the bed surface, effectively destroying emerging weeds, thus allowing one to avoid at least one round of weed infestation.

Many growers will use the stale seedbed technique, but using a shallow tilling device instead of the flame-weeder to destroy emerging weeds before seeding. The difference between that approach, using, let's say, a harrow cultivator, and using a flame-weeder, is that burning the weeds avoids any stirring up of the soil, guaranteeing that buried weed seeds will not be raised close enough to the surface to germinate.

With densely seeded crops such as mesclun, where weeding is not possible because the rows are spaced so closely to one another, this makes a big difference. 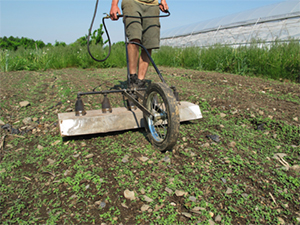 Simple, cost-effective, & VERY efficient
“ To enhance the stale seed bed technique, we lay clear plastic and row covers to induce weed growth. The results are very impressive — perhaps even scary, when you see just how many dormant seeds were lurking in the garden. ”

As mentioned earlier, a flame-weeder is mighty useful when planting carrots. The way we use it involves preparing our carrot seed beds 10 to 15 days in advance, but instead of seeding after destruction of the weeds, we seed into the stale bed halfway through the process, say at 5 to 7 days after stale bed preparation.

Carrots usually take from 8 to 12 days to germinate, so if you've followed through, the weeds will have had almost 20 days to show up before the first carrot starts to pop up. Then, just before the carrot plants emerge from the soil, the flame-weeder is run over the ground, leaving the crop to emerge into an essentially weed-free bed. 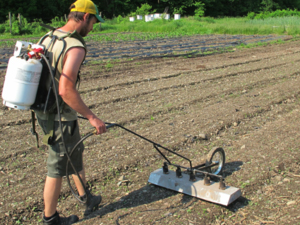 Flaming frees you up from labor-intensive carrot weeding.

Preemergence burning is the ultimate weed control for slow-germinating crops. This group includes beets and parsnips, as well as carrots. The technique must be practiced with diligence, however. If you wait too long to burn the weeds and the seedlings begin to emerge, the crop will be totally invaded by weeds.

If this happens you will need to spend many hours weeding by hand or quite possibly have to reseed altogether, thus delaying the crop by a few weeks. To avoid "missing the boat," we always throw a handful of seeds from a "herald" crop, that is, one known to germinate earlier than the main crop, at the head of the seedbed. A patch of tiny radish plants signals that beets are about to pop up, while tiny beet tips indicate that the carrot crop is imminent.

The emergence of the indicator crop tells us exactly when to flame-weed so that we can do so with confidence. We also make sure to write a note on our crop calendar, to remind us to check on the plants 5 days after the main crops have been direct-seeded. It's better to burn too early than too late. 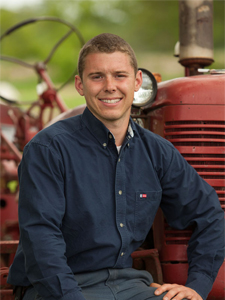 The longer I farm, I realize, the less I know, and the days always seem to get shorter. This means that I need to make sure that our farm is functioning smoothly and our crew is working effectively.

We all strive for efficiency on the farm, but let's take it one more step and discuss effectiveness. First, what's the difference?  We want efficiency, right?  Of course!  Efficiency is harvesting spinach at X number of pounds per hour. Effectiveness is recognizing that you can hire someone to pick spinach and then going and doing what only you can do — say, make 3 new sales calls, or scouting the onions for thrips.

Another key for us on the farm is the time we spend planning our work. We try to do a farm walk at the beginning of every week, checking every field, tunnel, and cooler, and making a master list of farm tasks and projects that need to be done. To this we'll add all the plantings and new tillage that needs to be done. Then we'll try to divvy it up for the different days during the week, paying attention to the weather. Lists will save you, every time.  We always take 15 minutes at the beginning and end of each day to plan and/or review our day and what was accomplished. This allows us to move crew from one task to the next, and equipment flows better around the farm. 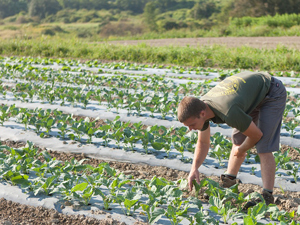 Frequent field walks for planning purposes are an important part of farming.
“ We always take 15 minutes at the beginning and end of each day to plan and review our day and what was accomplished. ”

For us, SOPs (Standard Operating Procedures) are essential for an effective farm. An SOP is a document you create to train and educate employees on commonly done tasks on the farm. As we create the SOP, we talk to other farmers and refine our methods to make sure the process is safe, effective, and easy to understand. Over the years, we have created SOPs for deploying row cover, loading trucks and setting up farmers' markets, washing eggs, planting lettuce, and more. This enables us to quickly bring new team members up to speed and also have a standard to refer back to if a task is not completed properly.  Our next step is to turn many of them into video SOPs. Learn more about Increasing Farm Efficiencies through SOPs…

Of course, there are always small improvements we try to make every day to make our farm more efficient. Here are a few examples. 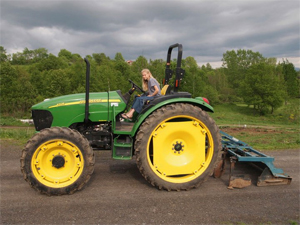 In some of our heavier soils, using a bedshaper helps keep crops drier.

Add to that standardizing harvest containers and bin quantities, tray poppers for transplants (here's a video), and running all our planning through easily accessable Google Docs, and we've seen our profit margins rise over the years. Remember, it's not how much money you make but how much you take home at the end of the day that counts.  Focusing on your farm's effectiveness as well as efficiency will make farming more fun, less stressful, and allow you to manage a complex operation with greater ease.

Top ˆ
On This Page

Recommendations from 3 Young Experts in the Field