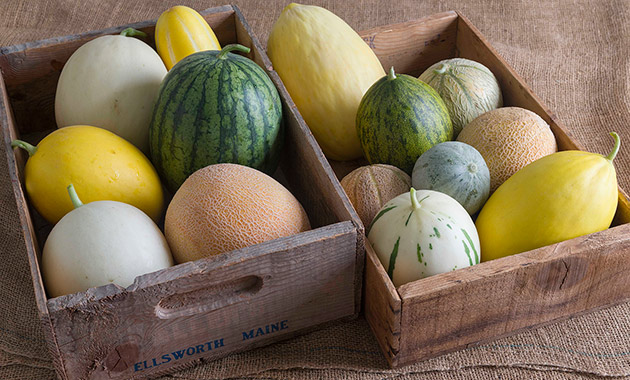 The Basics of Successful Melon Growing

The flavor of a ripe, freshly harvested melon is worth the bit of extra care it can require from the grower.

This article is about growing melon types and cultivars in the species Cucumis melo, which includes a diverse range of both netted and smooth melons, but not watermelons. As a group, these are the melons sometimes referred to as hard-shell melons or winter melons. Watermelons are a different genus and species, Citrullus lanatus var. lanatus, although both types are members of the Cucurbitaceae family.

A perfectly ripe, locally grown melon is one of the great taste treats of the produce world. Sweet and fragrant, with a texture that practically melts in the mouth, a fresh, well-grown local melon bears little resemblance to its supermarket counterpart. Most of the melon varieties favored by grower-shippers selling to supermarkets have been bred to withstand the rigors of shipping and handling, for good shelf life and, to make matters worse, are picked before they are fully ripe. Flavor is subordinate to firmness and shelf life for these melons.

Melons provide a unique niche for local market gardeners who can grow them to full ripeness, handle them gently, then deliver a product generally not available in supermarkets. And once consumers taste such a melon, they will not go back to the supermarket types.

In this article, we review the basics of successful melon production, from seed-starting and transplanting to the best way to harvest and store each type. With Johnny's melons, including many varieties selected for adaptability to challenging growing conditions, even a small grower has access to superb melon genetics. With the right varieties and knowledge, you can produce melons that will win over the most discerning buyers, chefs, and guests.

Getting Your Seedlings off to a Strong Start

Getting the Most from the Growing Season
Multiple plantings of different melon varieties is the recommended way to stagger ripening of your crop and extend the harvest window.

In the North, plants can be set out after the danger of frost has passed, from May through mid June.

In warmer areas, they can be transplanted in March and April.

Although there is some opportunity for making a single planting of varieties with staggered days-to-maturity, it is limited. In general, most melons have relatively similar days-to-maturity, so making multiple plantings is more effective for extending the harvest.

See our Comparison Chart of Melon Varieties to review distinguishing characteristics and features, including days to maturity.

Melons are heat-lovers and tender by nature, and although they can be direct-sown outdoors, we recommend this only under the warmest, most favorable growing conditions. Most growers find that starting seed indoors tips the odds in their favor by:

For indoor seed-starting, time your first sowing date to about a month before transplanting, so the seedlings don't get oversized. Lanky seedlings are especially prone to physical damage and transplant shock.

Sow 2–3 seeds, ¼-inch deep in cell flats. To further prevent damping off, use a slightly drier medium than typical for most other crops. Water with care and allow medium to become moderately dry between waterings. Adequate air circulation is essential. If necessary, position small fans over greenhouse benches.

To avoid root damage when transplanting, grow melons in large cells, 50 or 72 cells per tray, so the plants can size up sufficiently before setting out.

Place the trays on a heat mat, set at 80–90°F/27–32°C until the seeds germinate. After germination, dial the mat temperature back down to 75°F/24°C to grow the seedlings.

When the plants have developed a couple sets of true leaves, they've reached transplanting stage. They will need to be hardened off for about a week, however, by reducing temperature and water, before moving them outdoors.

When there is no longer any danger of frost and the weather is warm and settled, you can set the transplants out, spacing them 18 inches apart, in rows 6 feet apart. Melon seedlings are still tender even when hardened off, and handling them gently will minimize transplant shock and enhance field performance.

Immediately after transplanting, water them in with a fertilizer solution. We use an organic fish emulsion, as it delivers a good nutrient boost without burning the tender transplants.

Melons are typically grown on plastic mulch to warm the soil and prevent weeds. In cooler areas, solar mulch is recommended because it warms the soil better than black plastic. In the South, most growers grow melons only in spring to avoid the high heat of midsummer, though some also grow a fall-maturing crop.

The primary pest problem for melons is the cucumber beetle, which can severely damage the foliage and can also spread bacterial leaf wilt (Erwinia tracheiphila). To protect from cucumber beetles, most growers cover newly transplanted crops with row cover immediately after transplanting. We recommend AG-19 as it provides added warmth as well as insect exclusion. Hoops are not needed. On occasion, high winds may cause row cover to abrade the plants, but usually the damage is minimal and they will grow out of it.

In order to set fruit, melon plants must be pollinated. Once the vines begin to run and the first flowers appear, be sure to remove the covers or tunnels, or roll up the sides during the day, to allow access to pollinating insects. You may also find setting hives worthwhile, to aid pollination and improve yield.

Melon plants are thirsty and should be irrigated regularly — but only up until the fruits grow to full-size — not full ripeness. Drip irrigation is recommended to prevent excess water on foliage, which can lead to disease. During the fruit ripening stage, the qualities of texture and flavor develop, and the crop should not be watered unless the plants are showing obvious signs of heat stress, such as wilting. Irrigating while the fruits are ripening can result in bland, watery fruits.

Knowing just when to harvest a melon crop is part art and part science, but a skill you can acquire through observation and practice. To start, there are signs that herald the approach or presence of peak ripeness for the various types. How much time you expect to pass before the melon will be eaten is the other major consideration (more about this below).

Telltale Signs to Watch For

Visible or palpable changes at ripeness can involve the following:

Removal from the Vine

At ripeness, some melons "slip" from the vine easily or with a bit of a tug, whereas others must be cut. Most of the slip varieties are said to be ripe at either full slip or forced slip. With a little practice you will learn to recognize the distinctions between the two. The types that must be cut at peak ripeness would be overripe if left until they slipped from the vine.

Ripe fruit can be easily detached from the stem with a slight tug or a gentle push of the thumb. Examples: 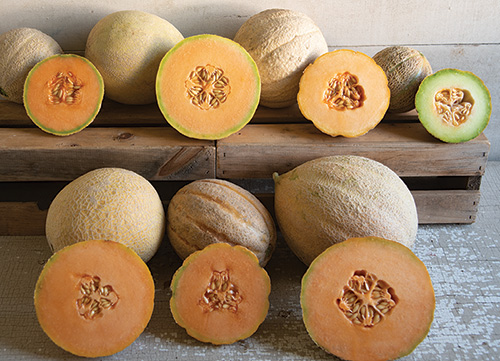 Ripe fruit requires an extra-firm push of the thumb to detach from the stem — more pressure is needed than with full-slip types. Examples:

These melons should be cut from the vine when ripe. Examples: 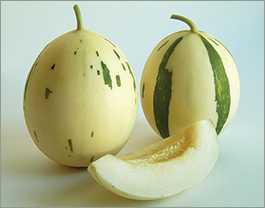 For more details on when to harvest the various types of melons, refer to the descriptions given on our product pages, and watch our series of melon-harvesting videos. With practice you will learn to harvest your melons at peak ripeness.

The storage conditions and periods listed here are approximations — the variety of melon and the ripeness of the fruit at the time it is harvested, among other factors, will affect its shelf life. In addition, needs and preferences vary. Here are some guidelines.

Melon shelf life can be ranked as follows:

When it comes to marketing melons, the eating experience speaks for itself: once you know how good a fresh melon can and should taste, you will be hooked!

Here are some suggestions for establishing and building a loyal following for your melon crop.

On the whole, growing your own melons is a worthwhile endeavor. There is a learning curve, but once you've mastered the fundamentals they can be a rewarding and profitable crop. Best of all, you can choose the types and cultivars to grow: no more bland melons for you, your family, friends, or customers. With the right varieties and know-how — even if your summers are short and cool — you can produce melons with premium appearance, quality, and flavor.

If you're thinking of including melons in your growing plans this year, give us a call and let us help.

Here are some additional resources to get you started:

In the Reticulatus group, ananas are oval melons with a heavily netted rind, like that of the familiar American cantaloupes, but usually larger, with white flesh. Highly popular in the Mideast, the sweet, aromatic, and slightly spicy flavor of ananas is among the best of all melon types.

Oblate, oval or piriform in shape, these are melons in the Makuwa group with white flesh with light aroma. 'Torpedo' is an extra-early variety with crisp, white, moderately sweet flesh, popular in Korea and other areas of Asia.

Commonly grown in Spain and in parts of Asia, these are oval-to-oblong melons in the Inodorous group, with skin that is bright-yellow and waxy when ripe. The cream-colored flesh is very sweet and slightly coarse.

These are the iconic muskmelons in the Reticulatus group, with their aromatic, "musky" sweet taste. Ours include adaptable American cultivars with orange flesh and netted skin.

Crenshaw fruits are large, oblong, and pale yellow fruits in the Inodorous group, with creamy sweet orange flesh. Their superb flavor is among the best of all melon types.

These small French melons are related to the cantaloupe group, with flesh similar to cantaloupes but even more highly aromatic. The rind may be either smooth or slightly netted, and will have characteristic sutures. Readiness can be trickier to determine than most other types. (See section on Ripeness Indicators.) Uncommon at big-box stores because their thin skin and soft flesh makes them difficult to ship without damage, Charentais have flavor and fragrance with notes of jasmine and honeysuckle. Originating in the mild, fertile Charentes region of West-Central France, the Charentais are some of the most revered melons in the world.

These round-to-slightly-oval melons originated in Israel, where they are called Galia after the breeder's daughter. Their thick, lime-green flesh is smooth, sweet, and complex in flavor, suggestive of tropical fruit with a fresh, banana-like aroma. In the Reticulatus group, the rind of Galia melons has a dense corky net like a cantaloupe, but without ribbing. They are a fairly recent development, with the first variety being released in 1973.

Johnny's honeydew cultivars offer earlier maturity, sweeter taste, attractive appearance, and smaller (medium) size than typical store-bought honeydews. Additionally, our honeydews develop a high sugar content even under cool and cloudy conditions, and are tolerant of conditions that normally cause cracking. Honeydew are in the Inodorous group and have firm flesh that holds better in storage than most melons.

Originating in Spain, piel de sapo means "toad skin," a testament to the distinctively thick, blotchy-green and yellow-speckled rind of this group. They are also known as Christmas or Santa Claus melons as typical, older varieties tended to be very large and extremely late-maturing, with good keeping quality. 'Lambkin' is smaller and much earlier to mature than the older cultivars. In the Inodorous group, Piel de Sapo have pale green to white, sweetly mild-tasting flesh.

Use our downloadable/printable PDF charts to compare distinguishing characteristics and features of all our C. melo varieties or just the cantaloupe varieties.