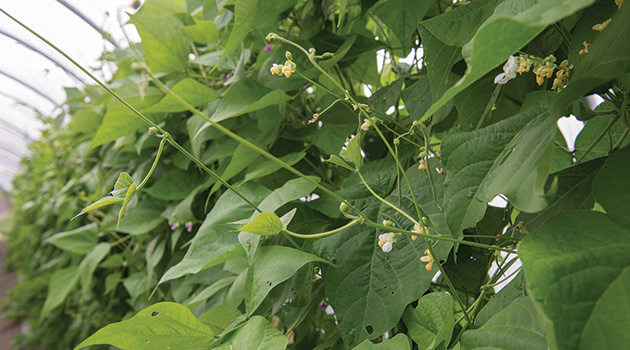 The Case for Pole Beans 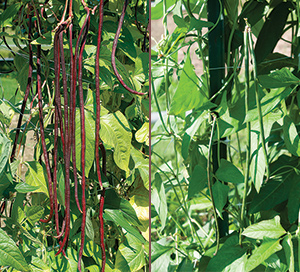 Yard-Long pods from around the globe

Above: 'Red Noodle' (L) & 'Python' (R)
Alternatively known as the asparagus bean, pea bean, long-podded cowpea, snake beans, bodi, bora, or Chinese long-bean, what we call our "yard-long" types are a different species of legume (Vigna unguiculata) from the common bean (Phaseolus vulgaris). Being tropical or subtropical in origin, these are heat- and humidity-loving, prodigious plants that attract pollinators.

Both home gardeners and commercial growers stand to gain from the benefits of growing pole beans. Here are some advantages to these vining types:

That said, the initial time and cost investment needed to grow pole beans is higher than it is for bush beans, because one needs to set up a trellis system.

Smaller-scale growers and gardeners can use a teepee system, with crops such as lettuce, parsley, or radishes started in the center prior to planting the beans. To simplify the trellis setup, we offer a sturdy 5'-tall Bean Tower that can accommodate a dozen bean plants; it's built to last and collapsible for off-season storage.

Pole beans can be also be companioned with the traditional bean "sisters," corn and squash (or another cucurbit, such as cucumbers). You can plant three bean seeds or so at the base of a corn plant when the cornstalk is about a foot high, and the beans will climb the corn while the cucurbit vines spread outward. Intercropping in the field is another option, both for the commercial and home gardener.

Depending on your location and the size of your rows or plots, you will need to work out which specific varieties and planting times work best for your system. 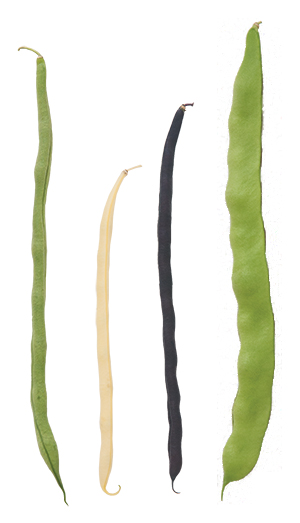 Pole beans come in a range of colors, flavors & shapes
Above, from left to right: 'Fortex' ; 'Monte Gusto' ; 'Carminat' ; 'Northeaster'

If you like wide, Romano-type beans, then try our early-maturing organic option, 'Northeaster'.

If you like long slender beans, try our customer favorite, 'Fortex', which can be harvested at 7" as a filet bean, or allowed to grow up to 11" and will still remain stringless and tender.

Originating in the tropics and subtropics, yard-long beans are a group of heat-loving beans from a different genus and species (Vigna unguiculata) from bush (Phaseolus vulgaris) or lima beans (Phaseolus lunatus). These beans really need to be cooked to taste good. Try sweet and graceful 'Python', or eye-catching 'Red Noodle'.

Pole Beans at Foster Ranch, California
These photos were taken at Phil Foster Ranch, San Juan Bautista & Hollister, California. Phil started planting these beans in late January. (This has been a very warm winter.) He'll move outdoors in April sowings, and move back into the tunnels for a few sowings in August and September, with picking finishing in December.

Of course, this is California — in New England, in contrast, one might plant first in early April in a closed-up tunnel (keeping Agro-fabric handy for frost-blanketing if needed), and succession-plant all summer long, with a final fall planting in August, allowing for harvest up into November.

Phil Foster of Pinnacle Organic Ranch is a leading example for commercial pole bean production. He has developed quite a following for his beans. Our Southern California territory sales representative, John Bauer recently paid Phil a visit, and together they gave us the lowdown for pole bean success. Here is John's write-up, in 6 easy-to-follow steps.

Phil grows his 'Northeaster' beans under cover in the early season, just to give the crop some extra heat. (Pole beans are commonly grown in tunnels in Europe, as well.) In the warmer season, he grows them in the open field, saving the tunnels for crops such as tomatoes.

(Note: Steps #1–3 are optional — we find they help assure success…)

Place drained seed in a carton with a warm, wet towel lining the bottom of the box. Spread seed out, about 2" deep, in bottom of box. Cover with another warm, wet towel. A drop-light hung in the top of the box overnight helps temperatures in the box stay in the 80's, for optimum priming of germination (~27–32°C).

Remove seed from priming box and treat with inoculant while seed is still damp. Seed will be swelled nicely, but no radical will be emerging yet. The germination process has been started.

Option B: Use plastic mulch, and jab-plant 3 seeds every 8" through the plastic. This method, which is fast and gives a good stand, is how we plant at the Research Farm in Albion, Maine. (In their home gardens, though, many of Johnny's bean experts favor Phil's method!)

Install steel or wood fence posts spaced 10–12' apart. When bean plants are 6" tall, start running twine down one side of the row, wrapping around each post, to the end of the row. Then come back up the other side, in the same way. Repeat as beans grow taller, at 12" intervals up the posts. With bare-ground production (if you do not intend to lay mulch), a close mechanical and/or tractor cultivation before installing the posts will help with weed control later. Weeds can alternatively be discouraged by using plastic or bio-mulch options.)

Beans respond very well to drip irrigation, to bring them up in soils with temperatures between 59–80°F (15–27°C). Drip irrigation saves water and effectively assists in the prevention of foliar diseases in your pole beans. Deep-cycle irrigation is preferable to short, numerous irrigations, because the latter can promote soil disease on stems and roots, such as Pythium damping-off pathogens (which are most prevalent in wet and cool conditions).

Growing pole beans can be a very satisfying occupation, as the plants can yield over a fairly long harvest period. Even so, you can get a nice succession and even more continuous supply by planting a new block every 2 weeks through the season.

Tunnel production is also very effective, because it allows you to start much earlier and go very late into the fall. In rainy climates, it also allows to you keep the vines dry and minimize plant diseases. 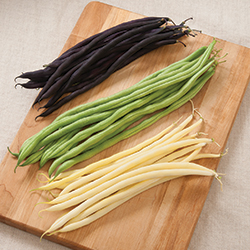 I and many of my grower friends grow the flat-pod organic 'Northeaster', although I've seen the round filet beans like 'Fortex' (green), 'Carminat' (purple), and 'Monte Gusto' (yellow) do very well and develop a great following in the markets. Try them all, and you decide which does best for your farm or garden.

Have fun and good luck!

Next Up: About Dry Beans…
View All Our Beans…