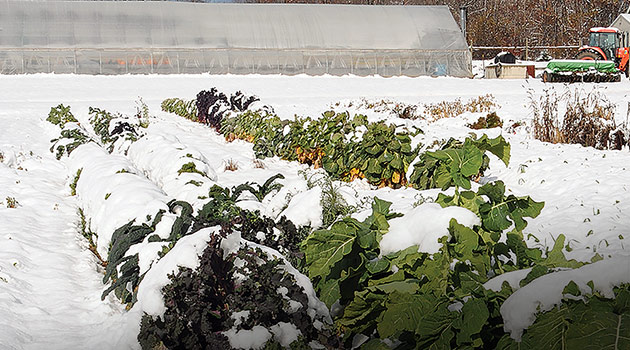 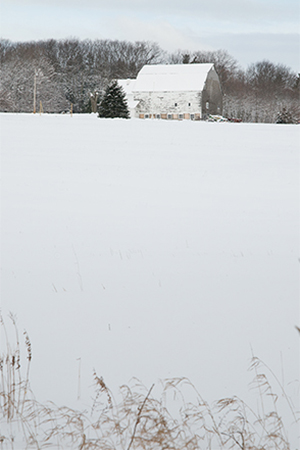 When temperatures drop and daylength dwindles, your harvest season need not come to a full stop. As more growers add high and low tunnels to their operations and participate in winter markets, we are frequently asked:

"What can I plant to harvest in winter, and when should I plant it?"

Producing marketable crops in winter requires learning the correct planting window dates for your location. We've developed this guide to provide a starting point, primarily for growing within unheated tunnels. You can use the charts and guidelines presented here while adjusting the techniques and timing to fit your own region and practice. Remember to keep records, to determine what works best and improve upon your successes.

To begin, it is helpful to distinguish between the two basic winter growing strategies. The first group you harvest in winter, the second group you leave in place over the winter to produce an early spring crop.

Note that there may be no real bright line between them in your system, but we suggest conceptualizing them separately as a way to create a production timeline. There is plenty of flexibility and overlap in the methods employed, and many growers combine methods and practice succession planting to achieve four-season production.

The key to scheduling your winter-harvest plantings is to identify the date by which your day length has decreased to 10 hours on its trajectory to the winter solstice. It is during this darkest time of the year — referred to by Eliot Coleman as the Persephone period — that growth slows to a glacial rate for most crops.

(You can obtain exact dates for your location using an app or website such as Sundial • Solar & Lunar Times or SunriseSunset.)

Though plants may not grow appreciably thereafter — that is, until day length has again increased to 10 hours plus — they can be harvested as needed as long as their maturity holds.

Anticipate and plan for any open bed space that may become available in late winter, once you have harvested your winter crops.

These late-winter sowings will be ready for harvest by early spring, often long before the same crop would, had it been grown outside. 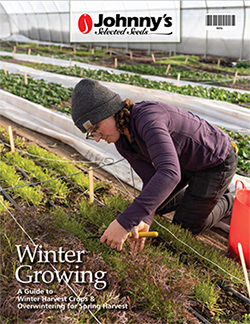