Here are some statistics to give us pause, as weeding season continues on many of our farms and gardens:

All those seeds are just sitting there, in what is known as the "weed seed bank," awaiting favorable conditions that allow them to germinate. Once they do, they compete with crops for moisture, nutrients, light, and space and, in many cases, out-compete them. That's why the most successful growers make weed control a priority. As weed ecologist Dr. Eric Gallandt explains, effective Weed Management for Sustainable Ag Systems involves a 2-phase approach which removes existing weeds, then stops new weeds from becoming established and going to seed. Over time, the weed seed bank diminishes and weeding becomes less of a major chore.

On a new farm or in a new field or garden, however, you can expect weeding to be a big part of your workload. You'll probably have to deal with both annual and perennial weeds, so you'll need different strategies and tools. Here are some pointers for getting ahead of both types.

For the most part, annual weeds develop from seeds that were either dropped to the surface of the soil or brought up to the surface by plowing, tilling, or some other disruption. Because weed seeds buried deeper than 2" (~5 cm) will remain dormant, weed control efforts should generally aim to disturb the soil as little as possible, to avoid exposing new seeds to conditions favorable for germination.

The first line of defense against annual weeds is cultivation. The ideal time to cultivate is when weeds are in the "thread stage," when they've just germinated and are no thicker than a thread. At that point, they are easily destroyed with a series of quick passes with a wheel hoe, or by a small, lightweight tool such as a collinear hoe. See our Guide to Long-handled Weeding & Cultivation Tools and Dr. Gallandt's article on Weed Management for Sustainable Farms for more details.

As weeds get bigger (or their numbers increase), more passes are needed, and cultivation tools need to get bigger and stronger to deal with them. Johnny's trapezoid hoes and stirrup hoes are available in several sizes to deal with increasingly tough weed problems. Read the product descriptions carefully when buying tools to ensure that you have a hoe for each type of weed situation.

A popular weed-control strategy on organic farms is "stale seedbed" planting, in which a bed is tilled and irrigated to encourage weed seeds to germinate. The weeds are then killed, either before the crop is planted or right before the crop emerges. This is best accomplished by flame-weeding the bed with a propane torch, which won't disturb the soil and bring up new weed seeds.

Here is an example of how to do stale seedbed planting: Till a bed, direct seed a crop such as carrots, and irrigate the bed. A few days before the crop is expected to emerge, flame-weed or very shallowly hoe the entire bed. When the crop emerges later, it won't have to compete with weeds right away and can get off to a good start.

You can tell when a crop is going to emerge by digging up a few seeds to see whether they are starting to germinate. Or, you can lay a pane of glass across a small section of the row, where it will warm the soil and cause the seeds beneath it to germinate a few days sooner than the rest. When you see those seeds germinate, use the flame-weeder on the bed to destroy the weeds

Another way to control weeds is to cover bare soil with mulch, which can be made of many different types of materials: polymers/plastics, some of which nowadays are biodegradable; paper, which is biodegradable; or organic substances such as mulch hay, straw, seaweed, and so on. The key to success with plastic and biodegradable film or paper mulch is to lay it down while the ground is free of growing weeds, and to stretch it taut for maximum soil contact. Keep planting holes as narrow as possible, big enough to accommodate the mature size of the crop but with no extra space where weeds can emerge. 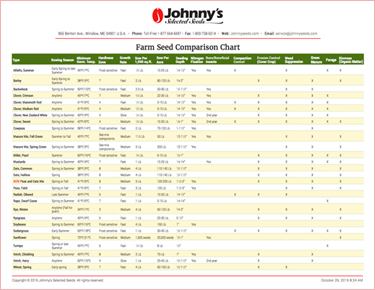 Some growers use landscape fabric, which can last a decade or longer if handled well, for paths and even on beds. The heavy black fabric is best for long-season crops such as tomatoes. Organic mulches such as mulch hay and straw are more difficult and time-consuming to apply, but they benefit the soil by adding nutrients and organic matter as they decompose.

Another strategy for getting ahead of annual weeds involves planting farm seed and cover crops in areas not in direct production. If there is a short window between harvest and planting, say a month or two between spring and fall crops, a quick annual such as buckwheat can be planted to keep the soil covered so weeds can't get established. Cover crops also can be used for a longer period, or even a full season, or in a series of rotations, to combat a weed problem. The key is to choose the right cover crop that will germinate and grow quickly, outcompeting weeds. See Further Reading, below, to learn more.

A much more entrenched problem — especially for organic growers — are the perennial weeds such as bindweed, Canada thistle, yellow nutsedge, pokeweed, and dock.

Not only do perennials survive year to year, they are able to re-grow quickly after cultivation from vegetative parts left in the soil, such as roots and tubers. In many cases, cultivation (cutting off the parts above the soil) stimulates the below-ground parts to send up even more stems and can spread pieces of root to new areas. In addition, many perennial weeds are prolific seed producers, so they are able to propagate themselves in multiple ways throughout the season.

That More Weeds = More Work is a reality in weed management. If perennial weeds are sparse, you may be able to dig each one with a shovel — just try to get the entire root system. If the roots cannot be removed, persist in cutting or mowing the plant to reduce its below-ground energy stores, and never let it go to seed.

If perennial weeds are prolific, you may need a summer fallow period, in which no crops are planted. Instead, plow the field to bring up the roots of big weeds and let them die on the surface. The perennials will re-sprout, but they will be weakened. Cultivating repeatedly will kill or diminish most of the weeds. A summer fallow may be needed every two or three years, in rotation with vegetable crops, if weed problems are severe.