Soil-blocking is an ingenious seed-starting method that allows the grower to produce vigorous seedlings with roots that quickly reestablish growth upon transplanting. Soil-blocking further eliminates the expense, waste, and storage issues associated with plastic pots. Read Eliot Coleman's account of how he came to develop and perfect this system for the small commercial grower.

When we started as commercial vegetable growers in 1969 we used to grow our seedlings in wooden flats filled with potting soil. We kept a series of marker boards with dowels set at the ideal spacing for the different crops, which we would place on top of the flat to make indentations in the potting soil where each plant would go. Some crops were direct-seeded into the flats, but others we would germinate in seedling flats and then transplant into the growing flat at the proper spacing.

Once the seedlings were large enough to set out in the field, we would use a sharp knife to cut the flat into cubes, each containing a plant, as if we were cutting a tray of brownies, before transplanting them. The advantage of this system over bare-root transplanting was that each seedling came with its own, mostly undisturbed root ball, enabling the transplants to become established quickly in their new home.

When the early "Speedlings" and plug tray systems first came out, we tried them but didn't like the results as well, because the plants didn't seem as vigorous or grow as rapidly. A bit of geometry taught us why. An upside-down pyramid has only one-third the volume of a cube of the same top diameter. So we went back to our wooden flat system but continued to hope to find something even better. 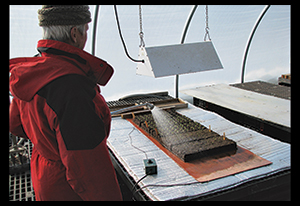 I first saw that something better on a visit to European farms in 1976. One of the small farms I visited was growing seedlings in soil blocks. Not only did the soil blocks contain the two-thirds greater soil volume mentioned earlier, but the separation into cubes had taken place even before seeding, so there was the absolute minimum of root disturbance.

European research further brought to light that the roots of container-grown seedlings encircle the container's inner surface, whereas roots growing in soil blocks "air-prune" themselves at the block's surfaces because of the separation between the blocks. On transplanting, the soil-block plant roots extend immediately into their new surroundings, and establish themselves three days sooner than the container-grown plants that have to learn to stop circling.

I was hooked — but I wanted more. The smallest size block that the early hand-blocking tools would make was 1½ inches square. I wanted smaller germination blocks for crops I started with bottom heat, such as tomatoes, peppers, eggplants, and celery, so I could fit more seedlings on each heating mat. 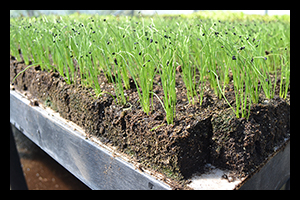 I convinced a British manufacturer to make a mini model for germination purposes (¾-inch x ¾-inch blocks) and to make similarly sized pins to poke holes in the top of 2-inch blocks, so the germinated seedlings could quickly be potted on — the square block in the square hole. This was now a complete seedling-starting system.

But as with any system, there are details involved. First, the ideal consistency of the starting medium for making soil blocks is much moister than most growers are used to. We are talking about something akin to chocolate fudge mix.

Second, after the block maker is jammed down into the moist mix to fill the forms, then scraped flat against the edge of the tub, the next step is not like squeezing toothpaste out of a tube. You do want to press down on the handle to firm the block, but once you see water seeping out of the bottom, you need to shift your fingers and lift up the sides of the form, and then let the press plate up, to effectively free the block-maker from the blocks. 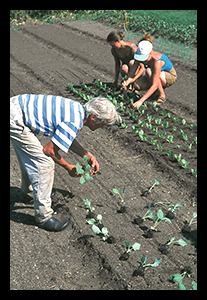 Many years ago we made special three-sided wooden flats to hold the blocks. (See The New Organic Grower.) Since then we have decided that an 18-inch x 8-inch piece of polycarbonate, cut from the scrap left over after putting polycarbonate end-walls on a greenhouse, makes a simpler and perfectly adequate flat.

A flat that size holds 60 of the 1½-inch blocks, 36 of the 2-inch blocks, and 18 of the 3-inch blocks. As a flat piece of plastic, the polycarbonate requires very little room to store in the off season, and doesn't blow around the farm like the Styrofoam and light plastic plug trays used to do.

There will always be a few blocks left empty in a flat where a few of the seeds did not germinate. Even these were no loss. When my children were younger they helped me with transplanting in the field. The empty blocks were the summer replacement for winter's snowballs — now called dirtballs — and they would happily pelt each other with them. 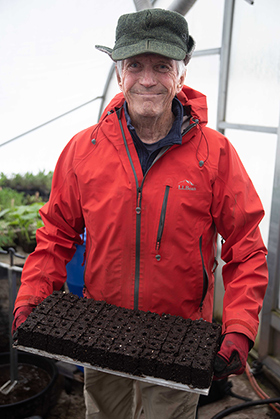 Eliot Coleman has over 40 years' experience in all aspects of organic farming, including field vegetables, greenhouse vegetables, rotational grazing of cattle and sheep, and range poultry. He is the author of The New Organic Grower, Four-Season Harvest, and The Winter Harvest Handbook, and co-author of The Four Season Farm Gardener's Cookbook.

Coleman, his wife and author Barbara Damrosch, and his daughter and farm manager Clara operate a commercial year-round market garden, in addition to horticultural research projects and tool invention, at Four Season Farm in Harborside, Maine. As Johnny's official tools advisor, Eliot works with Johnny's Research Department to develop and test tools of superior design and performance for our home and market gardener customers. Eliot's own designs and recommendations can be found throughout the Tools & Supplies section.

Demonstration of our soil-blocking tools — learn to make your own, eco-friendly soil blocks!

Definition: The process of starting seeds in small blocks, then transplanting the growing seedlings into successively bigger blocks.