Heirloom tomatoes are a favorite crop of many growers, bringing both a premium price and customers in search of old-fashioned tomato flavor. Growing heirloom tomatoes can be tricky, though, often requiring more labor and producing lower yields than modern tomato varieties.

The biggest concern with heirloom tomato production is disease. Unlike modern hybrids, which have generally had disease resistance bred into them, most old-fashioned varieties have minimal resistance. As a result, heirlooms may not produce for as long a time period as disease-resistant varieties. And if they lose a significant amount of foliage to disease, they won't taste as good as they should because it's the leaves that convert sunlight into sugars and other flavor compounds. Preventing disease, then, is paramount for commercial production of heirloom tomatoes.

In this article, we recommend 10 strategies that can help make heirloom tomatoes profitable for your farm.

The single most effective cultural practice with heirloom tomatoes is to use grafted plants, with the heirloom variety grafted onto a vigorous, disease-resistant rootstock.

Grafted heirlooms can produce yields 30–50% greater than nongrafted heirlooms. Grafting reduces the risk of soilborne diseases, and many growers feel that it leads to an overall vigor that helps the plants resist foliar diseases as well.

To learn more about grafting tomatoes, you can watch a Tomato Grafting Video; read our tech sheets on the advantages, materials, and techniques of Top-Grafting and Side-Grafting Tomatoes for Increased Vigor & Disease Resistance; and review Grafting for Disease Resistance in Heirloom Tomatoes, a guide published by the North Carolina Cooperative Extension Service.

Heirloom tomatoes do better when grown in high tunnels, where their foliage stays dry. Many tomato diseases thrive in moist conditions, including late blight, leaf mold, Botrytis and Alternaria.

Because most heirlooms form big, vigorous plants, they require a tall tunnel and a strong trellising system. Most greenhouse and high-tunnel tomatoes are pruned to a single leader, and trained to a string that can be lowered later in the season, so that fruits remain accessible from the ground. Grafted heirlooms can, however, be trained to a double leader, so fewer plants are required (making grafting more cost-effective). To accomplish this, all suckers need to be pruned except the one directly below the first flower cluster. That sucker will grow into a second main stem. Labor-saving innovations such as the Rollerhook ® and Tomahook simplify the lower-and-lean process.

To learn more, read our article about Trellising & Crop Support Systems for Tomatoes.

Because most heirloom tomatoes are vigorous growers, they do need to be pruned more often. Pruning (also called "suckering") is important because removing suckers provides better air circulation, which helps prevent foliar diseases. Pruning also encourages larger fruit production at the top of the plant.

For explicit instructions, watch Johnny's videos on How to Prune Greenhouse Tomatoes or Pruning Indeterminate Types in the Field. Our vine crop pruning and trellising tools facilitate crop maintenence hygiene and efficiency.

Planting tomatoes with wider alleys between rows is another strategy to increase air circulation and thus reduce disease pressure.

The standard recommendation for tomato spacing is 1 foot between plants and 4 feet between rows. With heirlooms, wider spacing in either or both directions will improve air flow.

In the field, tomatoes should be grown on mulch to prevent soil splash as well as to warm soil, conserve soil moisture, and prevent weeds, all of which benefit marketable yields.

Additionally, fertigation (fertilizing while irrigating) through the drip line is preferable to foliar feeding.

A disease prevention program is essential in areas where tomato disease pressure is high.

Begin by applying RootShield ® to transplants before setting them out. The active ingredient is a beneficial fungus that grows onto plant roots and provides protection against root diseases.

Once planted, tomatoes should be inspected regularly for any sign of disease — easy to do with heirlooms because you'll be pruning them often.

If you don't already know how, learn to identify common tomato diseases. Read our Overview of Tomato Pest, Disease & Physiological Disorders to gain some familiarity with the challenges of growing healthy tomatoes. Cornell University's Vegetable MD Online has a Tomato Disease Identification Key that can also help you learn the symptoms of diseases, as well as how to distinguish between environmental or nutrient-related causes. Once you have identified a disease, you can review Johnny's Pest & Disease Chart to find a recommended treatment.

Take a methodical approach to choosing heirloom varieties to grow. Trial a range of varieties and keep records, to pinpoint those that perform best in your conditions. As a quick reference on color, days-to-maturity, size, and texture, use our Heirloom Tomato Variety Comparison Chart.

In All About Tomatoes, we provide an overview of key selection criteria. Andrew Mefferd, former Johnny's tomato trial technician and editor of Growing for Market, offers additional advice on heirlooms in his article, How to Choose Tomato Varieties.

Most heirloom varieties have thin skin, which enhances eating quality but also makes the fruit prone to splitting on the vine. Being careful not to overwater can help to reduce the number of splits.

Plus, when tomatoes receive more water than needed, the excess is directed into the fruits, which has the effect of diluting flavor.

By providing whatever water is required intermittently, in several smaller irrigations, rather than all at once, you can alleviate splitting and gain better flavor. Carry a portable moisture meter to obtain quick, accurate soil-moisture readings.

Newer, heirloom-like varieties have been classically bred to produce fruit that have all the exquisite flavor and eating quality of true heirlooms, but from plants that have better overall vigor and disease resistance than heirlooms. The favorable yield and flavor from these newer "tomato hybrids from heirloom genetics" goes a long way toward justifying their slightly higher cost per seed: they simply produce a lot more without being prone to keeling over from disease the way heirlooms sometimes do.

Here are three "hy-loom" (F1) options you may consider trying:

To grow the best heirloom tomatoes, you will want to keep abreast of new developments, experiment a little, and refine your practices over time. Be sure to review best cultural practices for tomatoes before you start. ATTRA's free publication on Organic Tomato Production offers excellent, comprehensive advice on all facets of growing tomatoes.

With careful attention to best production practices — especially proactive disease prevention — heirloom tomatoes may become a successful, profitable crop for you, as well as a big hit with your customers. 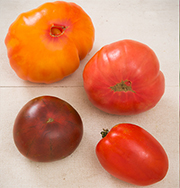