Above: Javier Zamora hosts students from the UC Santa Cruz Apprenticeship in Ecological Horticulture.
"I really, really want to give back," he says, "and have others take over these farming activities when the time comes, and keep it going."

These Prime ark are going wild! Time to order up Amigos.

We recently caught up with Javier Zamora, owner of JSM Organics Farm, in Aromas and Royal Oaks, in Monterey County, California, and a leading voice in his local organic community.

Javier, whose father was a farmer, started farming at age 11. Nowadays, Javier employs 25 workers full-time on the farm he named after his mother, Javier Sanchez Medina.

Under Javier's watchful, disciplined crop planning and attention to soil health, he and his crew dedicate themselves to growing a diversity of plants and rotating their crops, to produce the highest quality, certified-organic strawberries, raspberries, blackberries, vegetables, and cut flowers.

We were curious to hear how Javier had made his way into organic growing in the Salinas Valley. We learned about his influential outreach in the broader growing community and gained perspective on some of the challenges and opportunities faced by farmers and farm workers in one of the most intensively cropped agro-ecosystems in the country.

Tell us about your life — where you started out, and the path that led you to establish JSM Organics.

"I was born and raised in Mexico, and today, I just do what I love to do.

"I came to the States when I was 20. I come from a farming family. My father was a grower and irrigator for an American company that grew melons, cantaloupes, and pickling cucumbers. They were shipped to America on ice in those days — believe it or not — from all over Mexico, because there was no refrigerated trucking back then.

"When I went to middle school, we had a little plot at school, about an acre, for the kids. Then the school had 5 acres for corn, squash, sorghum, garbanzo beans. It was part of our co-op for students. You pitched in a little bit of money to get started, and at the end of the harvest we would get our returns. I used to plant my chard, tomatillos, and carrots.

"So from age 11, 12 years I already knew what all these vegetables were. But I had no idea I was eventually going to be using that kind of stuff and making a living out of it! Later, we moved to the Zamora Valley in west-central Mexico, where I used to go to pick strawberries.

"When I came to the States, to the L.A. area, at age 20, I spoke no English. I worked in the restaurant industry for nearly 20 years — from about 1989 to 2008 — going from dishwasher and manager to food and beverage director for different companies. When my wife and I lost everything in the 2008 financial crisis, we moved up to Northern California, where she had some relatives.

"I got my GED and went to college, at age 43, in the San Joaquin Valley (landscaping), came to Watsonville in 2011, and started working for a fresh cut-flower grower and a strawberry grower while going through Cabrillo College (organic production). They grew nothing but organic. Then I found an acre and a half with a trailer, and I rented it — and that's where my JSM Organics was launched, in 2012."

Place your orders this week

Can you tell us a little about the organizations that helped you gain expertise and funding in the business of organic farming?

"Well, things started going really well — I went through the Agriculture & Land-Based Training Association (ALBA) program in Salinas, California, which helps organic growers with limited resources, teaching them how to grow organics. Then — if you're good enough — they keep you in an incubator program for up to several years, give you an acre and a half or up to 5 acres, with subsidized prices for land and tech assistance.

"And organizations in the community — the organic certifiers, banks that can lend you money, UC extension teams, and so on — they come in and tell you what they can do for you and the farming community. And I really started connecting with everyone.

"In 2012, I had absolutely no money, and nobody would lend me anything. But thanks to ALBA, California Farm Link bank lent me $10,000 to expand my 1½ acres to 4 acres. I then took on 6 more acres, then 18 acres, started hiring people and growing my business, then 30 more.

"Today I own my ranch, with 80 acres of farming and 120 acres of conservation easement. And I have 25 full-time year-round employees."

Super busy day from the farm to a PMA meeting in Monterey back to the farm ay caramba! 24 hour day not enough.

Can you give us some insight into how your crop selection serves your business needs, your workers, your community, and your customers?

"I grow strawberries, raspberries, blackberries, blueberries, lots of green beans, summer squash, winter squash, cilantro and parsley, and lots of flowers. This helps us to have cash flow year-round, so I can keep my employees year-round. They make a livable wage at $12.50 to $20 per hour.

"I sell direct to retail stores, restaurants, a few farmers’ markets. I have my own private label — JSM Organics.

"I now mentor 7 different farmers, showing them how to farm and how to find resources, and so forth. Carmel College, ALBA farmers, local universities all come in to see me, and I show their students how to work as a diversified farmer."

A few days ago we hosted 15 Stanford university students before they start their semester. These smart kids have shown lots of interest around environmental issues, social justice and food production. It was an honor having them visiting us.

Tell us more about your outreach within the broader growing community of California — and beyond.

"I really, really want to give back, and have others take over these farming activities when the time comes, and keep it going.

"I belong to several boards and nonprofits, including ALBA, Eco Farm, and the Pajaro Valley Water Management Agency. For the USDA I sit on the Advisory Committee for Small and Beginning Farmers and Ranchers.

"Our employees come from many diverse backgrounds. I’m really involved with the community, making sure our voices are heard — especially the Latino immigrants."

If you were to sum up your mission in just a few words, how would you describe it? 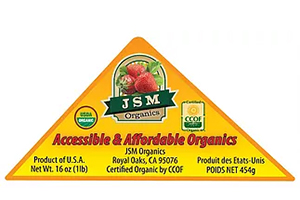 As the label attests, one of JSM Organic's primary goals is to provide affordable organic food that is easily accessible by the local community.
Image courtesy of JSM Organics. All rights reserved.
• instagram    • jsmorganics.com

"At JSM Organics we provide affordable organic food that is easily accessible by the local community. We understand that a lot of people want to eat better fruits and vegetables, but they have a tough time gaining access to these things. Our goal is to be accessible and affordable to these people.

"When it comes to producing affordable, accessible organic food for the local community, Johnny's might not sell the least expensive organic seeds — but when you factor in their efficiency, yield, quality, and customer service, I wouldn't use anybody else. Every organic grower knows you must buy some seeds from Johnny's!

"I really love what I do — growing food and showing people how and what we grow."