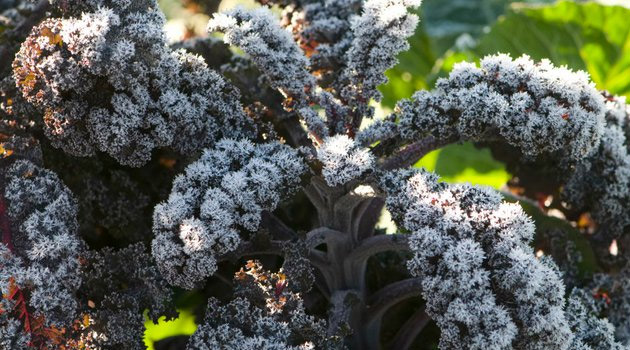 Focus on CROPS for WINTER GROWING

A recent New England growers' meeting revealed a 3-tiered ranking of crops proven successful for winter growing regionally. In order of popularity and level of reliability, the crops fell into the following 3 tiers:


Be sure to refer to our Winter Harvest and Overwintering Planting Charts to compare specifics and plan your winter growing strategy. Crops are grouped, loosely, to reflect their reliability for winter growing success.

Hardiness, adaptability to winter growing, and quality and quantity at harvest time also factored strongly into this 3-tiered ranking.

In addition to the crops listed in the above 3 groups, there are others that thrive in the winter:

Depending upon your experience, methods, latitude and microclimate, you may gain success with a number of others as well. According to Johnny's plant breeder John Navazio, PhD, "Winter vegetables are the fastest growing greens segment. The market for these crops — especially radicchio, chicory, spinach, and purple sprouting broccoli — is expanding faster than any of us can keep up with." We cover spinach below, and in the coming months we'll be providing information on the production of additional specialty crops in and over the winter months, on the basis of our trial results.

In the meantime, here are the details on the top performers in our winter growing trials, crop by crop, in the 3 above-listed tiers… 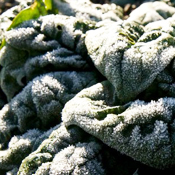 Winter spinach is exceptionally sweet because the plant builds up sugars in response to cold, which protect its cells from bursting in freezing conditions. It's also easy to grow for all skill levels, which makes it a good first choice if you are just starting out with winter growing.

Seed your winter-harvest spinach 35–50 days before the start of the Persephone period. Spinach does not germinate well in the warm conditions that often prevail at this time. To optimize germination rates when it's warm at seeding time, irrigate before planting, to cool the soil. To ensure your desired plant density, you can alternatively start spinach in plugs and grow the seedlings to transplant size (two true leaves).

Reliable choices for winter-harvest spinach include 'Corvair,' 'Kolibri,' 'Reflect,' and 'Space,' which can be seeded in late fall for winter harvest. 'Kolibri' performed very well in our recent caterpillar trials, and we have seen it overwintered very successfully at other farms.

The key is to seed so the plants are 1" tall when the hard freeze begins. They will resume growth quickly in spring and must be harvested before bolting. 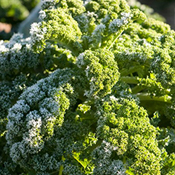 Kale, like spinach, is much sweeter in the coolest months of the year. All varieties of kale can be grown in the winter, but curled-leaf varieties are a bit hardier, and make for bigger bunches more quickly — you will spend less time harvesting the kale and your bunches will look fuller.

Seed kale in late July or early August for transplanting in September. Cover with lightweight row cover if flea beetles or cabbage loopers are a problem. Harvest from late October through March by clipping the leaves from the bottom up. It may not be necessary to protect kale for winter harvest if the crop will get used up by the time the coldest mid-winter temperatures hit.

Widely fluctuating temperatures can, however, result in cold damage to the leaves, and even hardy kale will need protection for overwintering at higher latitudes and more exposed microclimes. Kale plants of varying size can be kept overwinter in low tunnels, for harvest in early spring. But again, the quality of the large leaves remaining in spring will depend upon the severity of the preceding weather. Surviving small plants will quickly begin producing new growth. 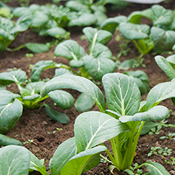 Pac choi is another good candidate for winter growing due to the thickness of its stems, which can endure a measure of freeze damage.

Other Asian greens, including komatsuna, mizuna, and tatsoi, should not be overlooked, as they too can deliver the winter results you're looking for.

Use caution with many of the mustard varieties, however; we have found them to bolt rather quickly following the winter solstice. 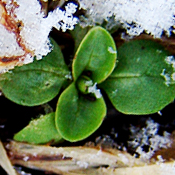 Because they are all very cold-hardy, arugula, claytonia, mâche, and minutina can often be grown in an unheated hoophouse without a second layer of row cover.

While they may not grow significantly during the Persephone period, they can be harvested during those darkest weeks.

Cress makes another great addition to a winter growing program because of its quick growth cycle.

Greens for winter harvest should be planted from August through October for harvest from September through March. Soil temperature when seeding should be 70°F/21.2°C or lower, to optimize germination rates.

All of these greens will survive over the winter as very small plants for extra-early spring growth and harvest. 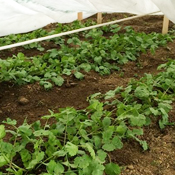 Cilantro should be sown mid September to early October in a protected structure, such as a high tunnel.

Plants will grow very slowly through the depths of winter, but take off in late winter to early spring, with harvests possible from March through May.

Overwintering Salanova® in unheated high tunnel
"The seeding date on the Salanovas was September 30… the transplant date to the high tunnel (unheated)… was approximately November 15, and our first harvest was March 29….

"They were amazingly hardy and had little cold damage. We used 1–3 layers of row cover, but have a temperature monitor under the rowcovers, and it got down to the high teens on several nights. The only one we see with some damage is Green Incised Leaf, but it is minor….

Lettuce is less cold-hardy than many greens, and fares best in a partially heated greenhouse or under a low tunnel within an unheated hoophouse. We suggest harvesting the lettuces before they're required to endure the coldest temperatures post mid winter. We also note the young leaves of salad mix tend to be less susceptible to freeze damage than mature lettuce heads.

Recently, growers in the north have been reporting some success with Salanova lettuces grown for mini head production and cut-and-come-again (CCA) salad mix in unheated high tunnels. Salanova has also excelled in winter trials at our own research farm in Albion, Maine. Setting out transplants in late September, and covering them with two layers of supported row cover, inside the tunnel, produces nice mini heads with minimal leaf damage for winter harvest.

One limiting factor in high tunnels is the filtering of sunlight that decreases the vivid red color of some lettuce varieties. For winter growing, we recommend 'Five Star Greenhouse Lettuce Mix' for its downy mildew resistance as well as the capacity of the red varieties in the mix to hold their red color. During winter months, varieties in some mixes may have varying growth rates. Some growers prefer to plant each variety individually and mix them after harvesting. 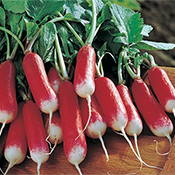 Radishes should be sown September through October for harvest through December. They can be covered with lightweight row cover to conserve heat or preclude flea beetles if necessary.

Although radishes are generally quite cold-tolerant, they will become spongy if frozen hard repeatedly.

All small, round radish varieties are good for winter growing, as are the long, slender French varieties 'd'Avignon' and 'Nelson.' 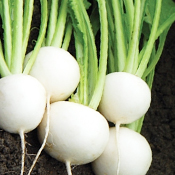 You can direct seed turnips in the fall. Plant enough seed to provide for a long winter-harvest period, and lay row cover over the crop if flea beetles are a problem.

Be advised that turnips will not hold into the spring, however, and will bolt by March in the tunnel.

'Mokum' carrots: Roots can be dug through winter as needed

Winter-harvest carrots are super sweet. In addition, they are orange — unlike most fresh winter-harvest crops — adding a welcome touch of color to the produce you offer for sale.

Carrots should be direct-seeded in early August for harvest from Thanksgiving through Christmas. If grown under row cover, their tops will be protected. A display of bunched carrots with attractive tops brightly signals freshness to prospective customers.

Carrots can also be successfully overwintered as young plants, to grow and reach harvest size in early spring.

'Napoli' and 'Mokum' are among the best varieties to plant in fall for winter harvest. 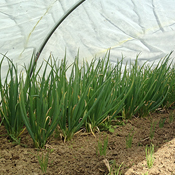 Bunching onions, which include scallions, can be grown for spring harvest but require ample lead time. They can be planted in either low or high tunnels, but we suggest low tunnels so they are not occupying the more valuable real estate within a high tunnel all winter.

Direct-seed scallions in August, and begin harvesting when they reach the desired size. For spring harvest, we start ours in the third week of August. Use our planting chart to determine the best date to start yours. (To harvest them in the winter, they would need to be started in early August or even earlier.)

Different varieties are preferred for winter-harvested scallions than for overwintered scallions. For late-winter harvest, 'Evergreen Hardy White' is good and cold-hardy, but it will bolt in the spring if overwintered. For overwintering, we suggest 'Deep Purple'.

Some varieties of fast-growing onions can be overwintered in low tunnels. Onions for overwintering should be sown in late August to early September, and transplanted out in late September to early October with the goal of having them reach the size of a pencil (about 4–5 leaves) before the hard freeze in November. If they make it through the winter, you will have "bunchable" spring onions by late May to early June.

In Quick Hoops trials at our research farm in Albion, we have found that 'T448,' 'Bridger', and 'Desert Sunrise' are great for this application.

Many varieties of leeks are winter-hardy to varying degrees. Protection in tunnels or by row covers will further enhance their survival. 'Lexton' and 'Bandit' are particularly winter-hardy leek varieties.

Winter growing is not a simple process with a guaranteed return. If you have an interest and the required resources, however, it can be rewarding in many ways. Chief among these:

Fresh produce —
ever welcome in winter!

If you complete construction of your first new high tunnel in late summer, you will likely want to plant something right away. That first winter harvest can be very inspiring. For those with just one tunnel, the wisdom of ripping out high-return crops like tomatoes, cucumbers, and peppers from the tunnel in late summer may seem misguided at first. But as winter draws closer, the quality and quantity of those crops will decrease. Your best decision may be to replace heat-loving summer crops with those that perform well during the darker half of the year. By combining clever succession strategies and subsequent construction of additional tunnels, you can reap the many benefits of winter growing. 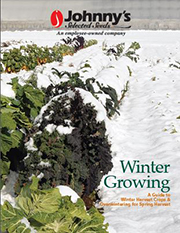