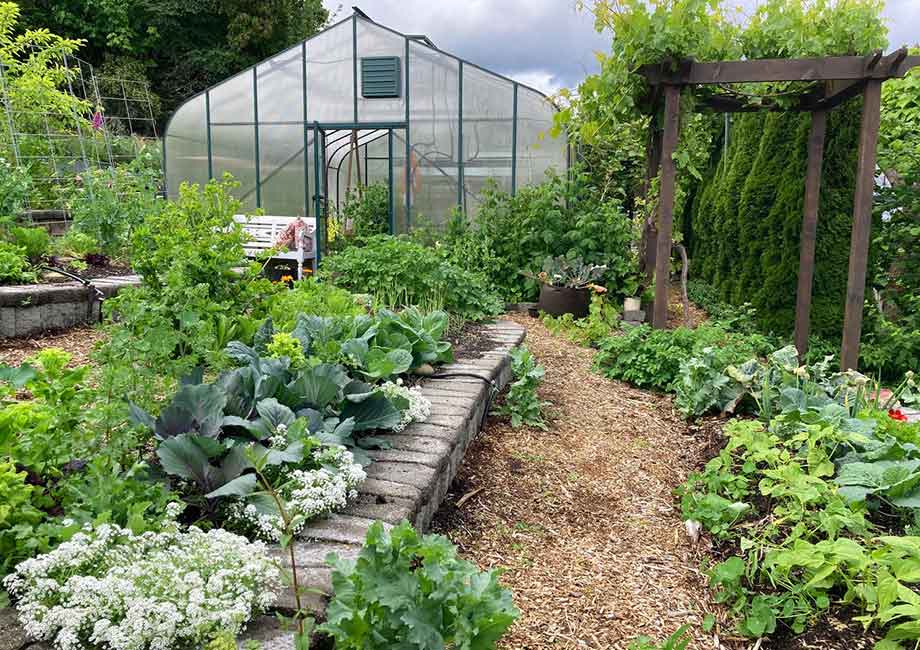 “ Most of my beds have alyssum in them, and I plant marigolds all over the place. This year I had zinnias and cosmos, too.… ”
— Contributor Donna Balzer
Photo courtesy of Donna Balzer 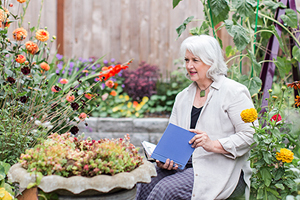 Why flowers? As a flower lover, I am a believer in the benefits of annual flowers. I take as much delight in observing the beneficial insect populations and bird life that my organic cutting garden attracts as I do in harvesting stems and filling vases throughout the season. As nourishers of the soul more than the corpus, one might dismiss flowers as unnecessary occupants of valuable space in the garden. But a closer exam reveals the many contributions flowers make to the overall health of the vegetable and herb garden.

If you're a vegetable gardener who sees too little space for flowers in your beds, you may find the practices of organic growers and flower farmers worth emulating. I took my Why flowers? conversation to three popular gardening personalities, each of whom has written books on vegetable growing. They advocate for inclusion of flowers as essential to the veggie garden, and in this series of introductory tips and advice make a strong case for planting flowers and herbs as companions to your vegetables. 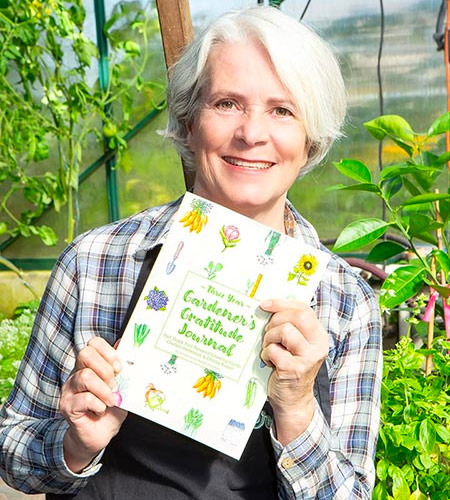 “ My biggest goal is to grow a mixed garden that will reduce or even eliminate pest problems! ”
— Donna Balzer • Horticulturist and gardening expert in British Columbia, Canada, author of No Guff Vegetable Gardening and The Gardener's Gratitude Journal

Donna Balzer is a horticulturist and gardening expert based in British Columbia, Canada. She shares her passion and best advice on the Helping Gardeners Grow podcast and in books, including No Guff Vegetable Gardening, written with co-author Steven Biggs.

Her mini-farm includes two greenhouses, 30 raised beds, and several grow bags, in which she produces vegetables, herbs, leafy greens, potatoes — and flowers. "First of all, flowers are just beautiful." But if you're not one to be led by their beauty to grow flowers with your vegetables, "You're missing a big world out there," Donna adds. "You want to have something blooming both early and later in the season, but you also should think about the middle of the season," to sustain beneficial insects throughout the growing season. "Beekeepers call mid-season the 'dearth period' because there's not much blooming to provide nectar. I like to plant hardworking flowers that bloom constantly to fill this role — such as alyssum."

Annual flowers add cheer to the vegetable garden, but for someone who observes her plantings closely, Donna is fascinated with the role flowers play in the ecosystem of a food garden. "My biggest goal is to grow a mixed garden that will reduce or even eliminate pest problems!" 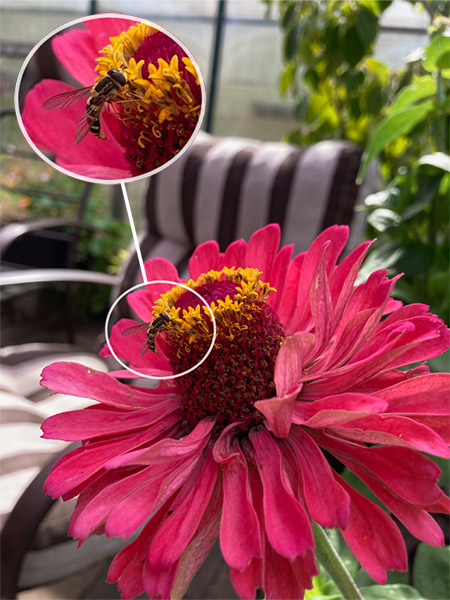 “ [W]hy not plant zinnias at the far end of your garden…? That will provide the wasps with an attractive place to go.… ”
— Donna Balzer

She hears reader and listener complaints about pest pressure, and finds herself advising those gardeners to grow more flowers. "For example, people who grow cabbages and broccoli go crazy about cabbage worms." Nobody wants to pick worms from their brassicas, "but I saw very few cabbage worms this past season, and I think it's because I plant a lot of flowers. Most of my beds have alyssum in them, and I plant marigolds all over the place. This year I had zinnias and cosmos, too."

Aphids can be a headache for many gardeners, but an organic practitioner like Donna will regard them more as food for beneficial insects like syrphid flies (also known as hoverflies and flower flies). "I saw some hovering over my zinnias late in the summer, so I took a closer look and saw them feasting on thousands of aphids."

Wasps are another complaint Donna hears, yet wasps play an important, primarily predatory role as part of the flower-visiting guild. Being nonfuzzy, their pollinating activity is mostly inadvertent, but they are nonspecific in their quest for nectar and plant-eating insects, and will visit just about any flower. "People put up red wasp traps, but why not plant zinnias at the far end of your garden, where nobody's really going to go anyway? That will provide the wasps with an attractive place to go, where they won't bother the humans in the garden but will take care of the cabbage butterflies."

Vegetable lovers may resist yielding food-gardening real estate to flowers, but flowers aren't space hogs, Donna points out. "I plant flowers here and there. I plant clumps of them. You can plant them in pots to spread around the garden.

“ I interplant my edible crops with flowers because the more diversity in the garden, the better. ”
— Lorene Edwards Forkner • Seattle, Washington garden designer, watercolor artist, and author of The Beginner's Guide to Growing Great Vegetables

Not too far from Donna's garden in Western Canada, Lorene Edwards Forkner tends to an urban garden in Seattle, Washington. The author of The Beginner's Guide to Growing Great Vegetables, Lorene believes flowers are part of the natural process for managing a vegetable patch. "If you look at most vegetables, they're harvested before they blossom. Yet your production and yield are going to be increased if you attract a greater pollinator population with blooming flowers."

Her motto: More life brings more life. "You don't want to do anything in your garden that diminishes life — plants, insects, a living ecosystem in the soil biology — it's all important." Like Donna, Lorene is an organic gardener, which means she uses no toxic chemical inputs like pesticides or fungicides. "The majority of the bugs in our gardens are beneficial. Unless you know it to be a problem species, like a Japanese beetle or a slug, I suggest taking a hands-off approach to small life forms in the garden."

Lorene's integrated city garden includes ornamental plants, vegetables, leafy greens, fruits and herbs, as well as annual flowers. "I interplant my edible crops with flowers because the more diversity in the garden, the better. Those flowers are advantageous to beneficial insects feeding on insects and pollen." She freely plants marigolds, calendula, dahlias, annual candytuft, and petunias throughout the vegetable garden. 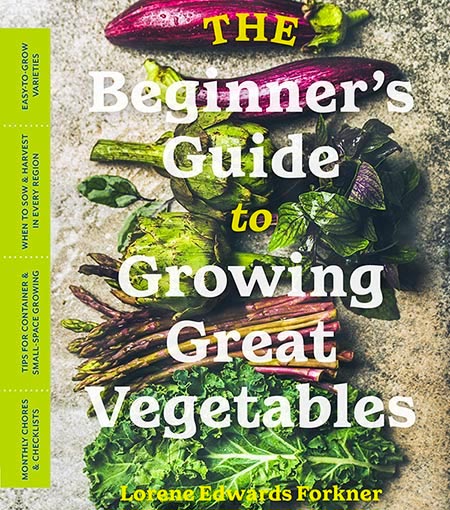 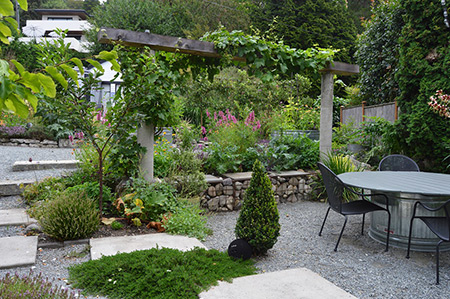 “ I interplant my edible crops with flowers because the more diversity in the garden, the better. ”
— Lorene Edwards Forkner

In her book she advises: "Pairing plants that contain pest-repellent properties and/or attract pest-eating bugs and pollinators … is actually an elegant example of the many underlying, balanced, and natural systems at work in the garden."

You don't have to squeeze flowers into the vegetable garden, though. Lorene suggests changing your thinking. One alternative is to "Bring the vegetable to the ornamental garden. It's easy to interplant quick in-and-out crops like lettuces and radishes in smaller spots, or to plant parsley, cilantro, or chives in-between flowers," she says.

With an Instagram handle @gardenercook, it's no surprise to learn that herbs are Lorene's go-to favorites that fulfill both edible and ornamental roles, especially in the small garden. "When you are growing edibles, you're actually growing flavor. You're never going to get more flavor per square foot of the garden than with herbs. It's the herbs that gussy up grocery store tomatoes!" Aromatic herbs like dill, sage, and mint make good companions for broccoli, cabbage, and kale.

An award-winning garden designer, Lorene also thinks about the aesthetic role of flowers in the landscape. "Flowers are a great design element. Their height and form can break up a vegetable garden, where many of the crops are shorter in stature. Annuals can fill in gaps left by harvesting, too. Think about growing lighter flowers like cosmos or larkspur that won't cast a lot of shade on sun-seeking edibles."

Lisa Mason Ziegler is a specialty cut-flower farmer based in Newport News, Virginia, and author of Vegetables Love Flowers. Her book's subtitle gets right to the heart of things: Companion Planting for Beauty and Bounty. She raises flowers and vegetables on about 1½ acres of her 3-acre farm, which is home base for The Gardener's Workshop, a virtual learning center and online garden shop. 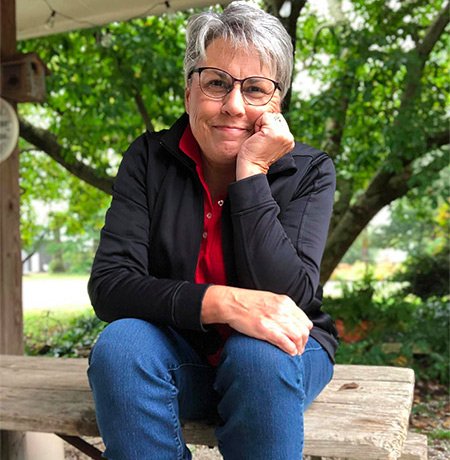 “ Nature is powerful and wonderful, but pollinators have to have a reason to come into your garden — and flowers are at the center of of it all. ”
— Lisa Mason Ziegler, specialty cut-flower farmer based at The Gardener's Workshop in Newport News, Virginia and author of Vegetables Love Flowers and Cool Flowers

“ It's about the company flowers keep — the insects, pollinators, and other beneficials. ”
— Lisa Mason Ziegler

Lisa says her book is not really about vegetables. "It's about how flowers benefit vegetables. It's about the company flowers keep — the insects, pollinators, and other beneficials. There is just no better way to have a constant presence of flowers in the vegetable patch than with a cutting garden."

She, too, has heard the question, Why flowers?

"People ask, 'Why would I give up one square foot of my vegetable patch to flowers?' Well, I'm here to tell them, 'If you're not growing 20% flowers in your vegetable patch, you are probably struggling to grow organically. Nature is powerful and wonderful, but pollinators have to have a reason to come into your garden — and flowers are at the center of of it all.' "

She recommends dividing that 20% portion of flowers into two distinct planting times and locations. "You want 10% of your garden in flowers blooming today and the other 10% planted for the next wave of blooms, so you have that constant flow of flowers. We want to invite pollinators and beneficial insects into our garden, but we want them to stay!"

The appendix to Vegetables Love Flowers includes two garden plans demonstrating succession plantings that incorporate flowers into the vegetable garden over four seasons. The plans are based on 3' x 12' beds, for both a six-bed large plot garden and a one-bed city salad garden.

Knowing which flower varieties attract specific pollinators is a bonus, but don't worry if you don't have all the details figured out, Lisa says. "In general, you just have to plant flowers and have constant blooms. That's why I suggest you have two planting areas, no matter what the size of your garden."

Lisa advocates that her readers maintain both a well-stocked cutting garden and a diversified vegetable garden. "Often the story I hear is, 'Yeah, I planted marigolds once in the corner of my garden plot. They were finished blooming in four weeks and I didn't see any difference in my vegetables.' But it's the continuity of blooms that a cutting garden provides, that leads to results."

Some of Donna's Favorite Companion Flowers

Donna, too, advocates for planting a variety of flowers, herbs, and vegetables.

“ I saw some hovering over my zinnias late in the summer, so I took a closer look and saw them feasting on thousands of aphids. ”
Donna sees aphids as food for beneficial insects like syrphid flies (also known as hoverflies and flower flies).

"That's my recipe for a successful vegetable garden," she maintains. "Grow flowers for the humans, the insects, the bird life, and the vegetables."

Some of Lorene's Favorite Companion Flowers 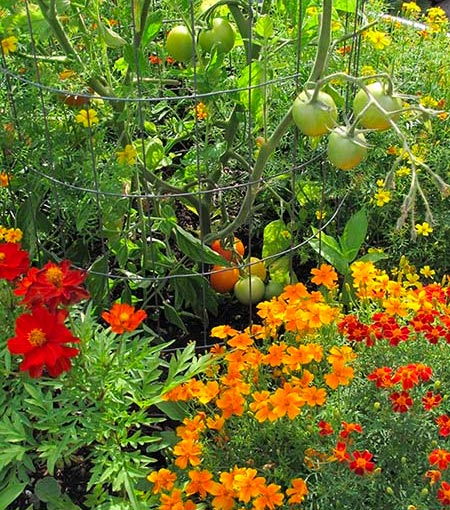 Some of Lisa's Favorite Companion Flowers

Flower farmer and educator Lisa Ziegler believes that planting vegetables and flowers together is one of the oldest ways to create a healthy, bountiful garden. "Vegetables love pollinators and pollinators love flowers," she says. 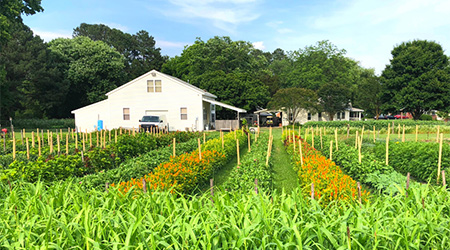 A few favorites from our author, Debra Prinzing

A few favorites from our Flower Product Manager, Hillary Alger

Hillary notes, "These are easy to grow crops that work well alongside annual vegetable production. I always have small patches of flowers intermingled with crops in my vegetable garden."